Live Songwriting Part 4 - Not Every Idea Is A Winner!

Okay, I admit it. Not every song idea is going to work. I walked past my bloke watching his wall earlier this week and felt like running up to him and yelling "WHAT ARE YOU DOING!!!!!!! IT"S JUST A BLOODY WALL!!!! GET A LIFE YOU *********!!!!". Of course I didn't. I just walked on, clutching my rosary beads and muttering obscenities in a language nobody but me could understand. The Gollum of songwriters.... that's me..
While this fella has been looking at his wall and I've been trying and trying to find a way into a song about it I have actually written two new songs and brought a third back to life. Obviously the wall song is never going to happen and I guess that's okay. It's given me a few songs as "spin offs" and that's great.
So, I'm going to stop beating my head against this wall (he'll only come and patch up the damage anyway..) and spend some time revisiting some abandoned songs to see whether I can bring something worthwhile out of them.
In the meantime come and see Suzette Herft and myself at the Albert Park Yacht Club next Friday night (April 17). We'll be doing some of our original songs as well as our Baez / Dylan show, Farewell Angelina. I'm particularly looking forward to playing a couple of Suzette's songs from her new album for the first time.
Details on my Shows page.
Hope to see you there.
Patrick 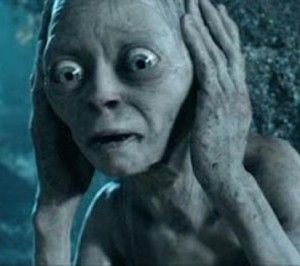 The Gollum of Songwriters....