Look What I Found! A Song By William F Barrow

So here I am, right in the middle of a terrible song writing drought.
I've got bits and pieces of half started songs, ideas scribbled in note books, chord progressions, melodies, grooves..... All ready to go and absolutely nothing to write about. And that's the problem really. Sometimes it just feels like you're disconnected from the essence of songs, from the emotional need to get the lyrics down, no matter what ridiculous time of night it is or what else needs to be done. When I'm in this state I'll happily tackle all sorts of menial tasks, anything to avoid the horror of sitting looking at an empty page, wondering how on earth I ever wrote anything decent at all! A few time s recently I've actually thought of myself as an artist. Huh.....
An actual artist would find a way through this phase. He'd lock himself in a garret with only hard bread, stale cheese and some insipid vinegar posing as wine and refuse to come out until he'd created the statue of David or painted the Mona Lisa or written Macbeth or War and Peace. He would not sit on the couch spilling potato chip crumbs down his jumper while watching endless re-runs of Midsummer Murders and strumming mindlessly on a ukulele......
But I digress.
In an effort to try and get something together for the next songwriters workshop (and avoid showing up with a song written fifteen years ago and pretending it's actually current) I decided to have another look through the folder containing the poems of my great uncle William F Barrow (here after referred to as Uncle Bill). And guess what I found? A song! Yes a fully written song, and....it has a good, old fashioned preamble, just like I tried to do with 'Too Fat To Fly'.
This was written at the end of WW2 whilst he was still stationed at Balikpapan and waiting to be sent home to Australia. It's full of the dreadful family gags and puns I've become so fond of, and has some clever internal rhymes. One is an absolute howler.... See if you can pick it.
I've no idea of the tune but I imagine it as a mess room sing along with a jangly out of tune piano.
So here it is. Probably the first time anyone has seen it since 1945.....

In this headquarters unit
There is, as you should know
A lyre with none to tune it,
A trumpet, none to blow;
So should you be so gracious
To bend a willing ear,
I’ll sing a song herbaceous
That fits the climate here:

The war was quickly finished
On Balkpapan front,
But, strong and undiminished,
We planned another stunt;
It took a back-to nature lean
We planned to dig a garden
And when we dig we dig....I mean
There’s no I-beg-your-pardon.

So it’s out, subalterns, turn the sod,
And load up the trailer with sand,
There is much to be done till the levels are run,
For a garden of gardens is planned.

The work of ‘G’ and ‘I’ relaxed
And also ‘A’ and ‘Q’,
Which left the office overtaxed
With lack of work to do;
Now boredom makes the strongest crack,
And so at half past four
They found that though they loved the back
They loved the garden more.

So it’s out captains, turn the clod,
And load up the trailer with grass;
I am ruthlessly drawn by a sizable lawn –
If the jolly thing comes to pass.

But office work of short extent
Increased the working hours;
From three o’clock the time was spent
Amongst the birds and flowers.
They burrowed where the path was laid
With outstretched necks and rubbery,
To keep the drains to proper grade
Beneath pre-planted shrubbery.

So it’s out majors, bridge the drains,

And fill the trailers with stones;
We are wise to the lurk of the pressure of work
And a garden’s no place for drones.

As time goes on and peace gets real,
With news of home releases,
The lawn, with extra spurts of zeal,
Takes shape in bits and pieces;
But here the problem rears its head:
Before we really know it,
We’ll have instead a grassy spread
With no one here to mow it!

So it’s subalterns, captains, majors all,
Dont fear the aftermath;
I will finally get pleasure by leading at leisure
Up the garden path. 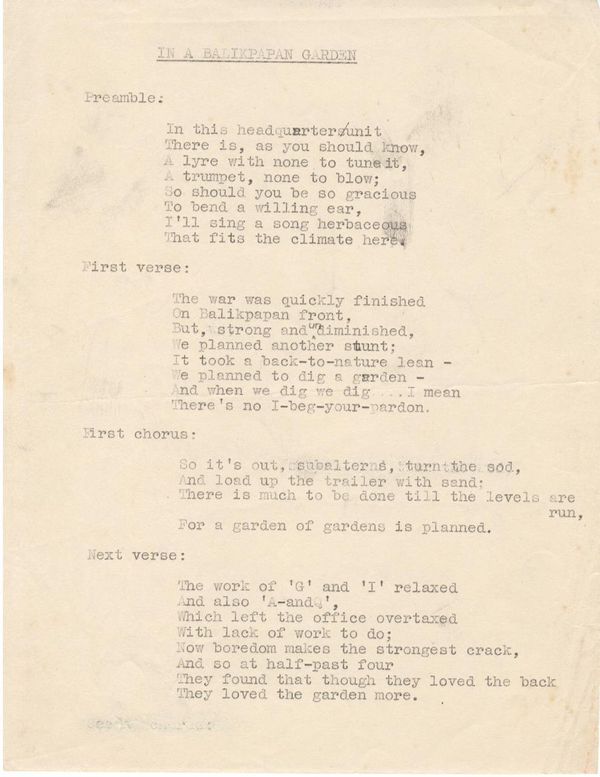