It’s taken me a while to think this through but I wanted to farewell one of the great mentors in my life properly.

Danny Spooner was a constant in my life. He never really changed and I guess, like many, I thought he would go on forever. So it came as a shock when I heard he was ill. I don’t recall him ever being sick. The man was indestructible! That was part of his legend, he was always there, always chirpy and always “up for it”. I am really pleased I was able to see him a week or two before he died. It was important to touch base, even if only for a few minutes.

I played fiddle for Danny on and off for nearly 30 years and I am honoured to have done so. There were large gaps in our playing together when I was really busy with bands or he was doing something different but, just when I started thinking it was finished the phone would ring “Hello Pat, it’s Danny. Ow are ya mate? I’ve got a luvly little gig at (fill in the gap) and I thought it would be great if maybe you and I could do it togever. What do ya reckon? And by the way, ave you got any of those strings you gave me last time?” And so we’d do “a little practice” somewhere, do a couple of shows, agree to do more and then life would get in the way again. That’s how it would go.

Danny was timeless. Thinking about it now I can remember minute details of gigs we did together but they all roll into the same gig and I couldn’t tell you when they happened. It could be two years ago or twenty. One of the reasons it’s hard to pin down is he paid absolutely no attention to trends or directions in folk music so there are no “this era or that era” chronological guides to go by. That’s not to say he didn’t develop or change. He certainly did, in fact his repertoire was constantly evolving, it was hard to keep up with and I decided at some point that he lived in a parallel universe where there was an entirely different repertoire that everyone knows and he would spend most of his time there, occasionally visiting ours with a new swag of songs. I’m pretty sure the lads in the shanty group from Port Fairy would say the same thing. Where on earth did he get his songs from? He never wrote one as far as I know. He used to say “why bother when there are so many great songs out there”? Why bother indeed if you’re tapped into this limitless resource of songs?

I don’t remember when I first saw Danny perform. I suppose it would have been at the Geelong Folk Club in the late 70s or early 80s bit I do remember out first practice session. He had been coming to the Tuesday night session at the Golden Age Hotel in Geelong where I was a regular at the time. It must have been in the mid 80s. I was devouring the Martin Carthy / Dave Swarbrick records at the time and learning the tunes off them which fitted into what Danny was doing. Somehow he plucked me out of the crowd of players there and asked me to come around to his house in Newtown, Geelong. I turned up with my fiddle and we started playing. I remember he asked me not to sit on the arms of the couch as “Gayle would do ‘er lolly” if she saw me sitting on them. We started doing gigs soon afterwards.

To say I learnt a lot from Danny doesn’t do his influence on me justice. To quote Isaac Newton “If I have seen further, it is by standing on the shoulders of giants." Danny is one of my giants. To put it another way, every time I play or perform carry a few people with me and Danny Spooner is probably top amongst them. He showed me how internal rhythms work. Not the written stuff, the organic rhythms that make a song or tune live. That all important swing. He was an absolute master at this. You’d have to be if so much of your performances are acapella or backed by the simple drones of a concertina. He would intuitively strip a song to its bare essence and then sing it as if that was the only way it could be sung. As a fiddle player I would love getting into those little patterns and twisting them and falling off the pitches and rhythms the way he did with his voice. As a guitar player I couldn’t do it at all. None of my approaches would work with Danny. Pete Daffy could and so, in the earlier days, could Gordon McIntyre. I think I could probably do it now; sadly I will never get the chance.

Danny also taught me the power of storytelling. I used to watch in awe as he spun the magical web with his stories about the people behind the songs and the historical context of the music, often bringing it home with reference to situations today. Having said that, I’m not sure how political Danny was. He obviously identified with his working class roots and loved the songs of people like Alastair Hewlett and Ewen MacColl. They formed a large part of his repertoire (the obscure ones of course) but in our conversations I thought he was more of a pragmatist than one would imagine of a well known folk singer. I suppose the historian in him was more interested in the general spread of human kind than a straight out folk singer would be. I take great pride that people are now calling me a story teller / singer songwriter. That’s Danny’s legacy right there.

One of the things I loved about Danny was his complete lack of interest in what my brother Richard calls “the Celebrity Cult”. Fame and reputation meant nothing to Danny. He liked you, or he didn’t. The same went for music. He would wax lyrical about some unknown player he had seen who really impressed him and be oblivious to the “big names” around the folk world, unless he liked their music. Similarly every gig was the same to Danny. I played with him to six people standing under a gum tree and to over a thousand people in concert halls. To him they were all the same and he treated each one the same way. This meant, for me, that I could find myself playing a song I’d never heard before, onstage, in front of hundreds of people. He was fearless and would launch into something he hadn’t done in years, confident he’d get through to the end. He never, ever apologized for getting something wrong or for slipping up. He’d just flash his cheeky grin (as if he’d meant to do it) and push on regardless.

You could tell when Danny was “on” and he usually was. I would watch his feet. Once they started to move you knew it was going to be a good show. Anthony O’Neill talks about the music coming up from the ground through your feet and I think Danny (consciously or otherwise) tapped into this. Those driving rhythms would start in his feet and come through his whole body, the concertina would sway and everything he had would be committed to the song. It was grand to watch, especially from beside him on the stage.

I’ve just realized I haven’t mentioned his voice. He was a bloody great singer with a huge range and immense power. He often refused to use a microphone, he just didn’t need it. I learnt to enjoy acoustic performances with him. I was brought up playing through PA gear so it was a big learning curve for me. Now I prefer to play acoustically if I possibly can.

So there you go. Danny was my friend, but, probably because of our age difference he was more of a mentor, maybe even a father figure to me. I respected him enormously and I will never forget the huge positive impact he has had on my life and music. Above all I’ll miss him. I’ll miss those phone calls out of the blue and the random coming together of gigs with him and lately Peter Daffy. I’ll miss those dancing feet and the little giggles when something either comes unstuck or comes brilliantly together. I’ll miss those Port Fairy breakfasts with him and Gayle. The last time I saw him was at his wonderful tribute concert at the Daylesford Town Hall. When we parted we agreed to get together soon to “have a play”. I think both of us knew it would never happen but we were both content to pretend it might. If there is an afterlife I hope he’s having the time of his afterlife catching up and having a play with some of his old mates, and I hope, when the time comes, I’ll be there too, with my fiddle… ‘aving a play… 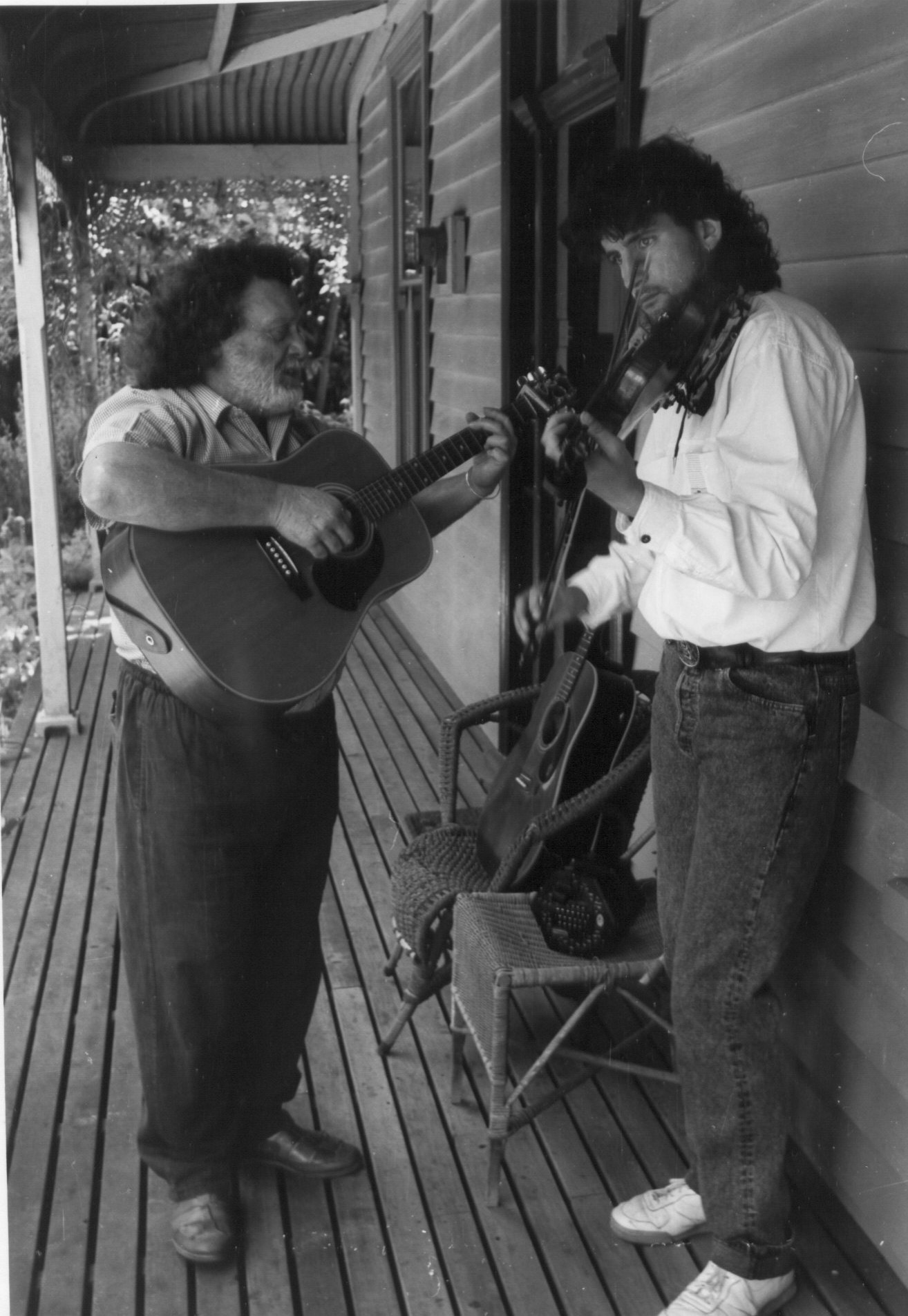