A few years ago I was having dinner with my colleague and friend Rob Marsh (a true gentleman and a fine singer songwriter to boot, also a bottomless source of trivial information about just about anything) and he asked mt the "desert island disc" question. "If you had to settle for just one record for the rest of your life what would it be?" I thought for a bit and then it just popped out "Penguin Eggs by Nick Jones". I probably thought I was being clever and obscure but I should have known better. Not only did Rob have 'Penguin Eggs' but he had everything else by Nick Jones as well..... Of course he did, Rob's like that! So then I had to justify my call, why 'Penguin Eggs' and not 'Sergeant  Pepper' or 'Dark Side Of The Moon' or something better known and more successful?
I vaguely remember hearing of Nick Jones and the dreadful car accident that ended his career in 1982. I was just a bit young to really have appreciated him at the time (I was 19 and still only scratching the surface of the world of folk music) and for whatever reason had not heard his music. I finally caught the Nick Jones bug when Janette Geri lent me a copy of 'Penguin Eggs" in the mid 90's. It was a revelation! Not because I had never heard anything like it before, but because it was like everything I'd heard before but brought to perfection in one album. It was all there. In my mind Nick was (and still is) the greatest of the English folk guitar players. There are elements of Martin Carthy, Davey Graham, Bert Jansch, Richard Thompson and the rest in Nick's playing but somehow it all comes together in a perfect package with Nick. This album somehow towers over his previous recordings as well. You can hear snippets of what's to come in the older albums but sometimes the groove isn't quite there or the arrangement is a bit over fussy or the song choices don't quite work. Whatever it is it sounds like the older works are stepping stones towards the final work in 'Penguin Eggs'. And so far we're just talking about the guitar playing, then there's his voice!
For me Nick is simply the best male folk singer in the English tradition full stop. He had a pure tone and tremendous control but used his voice in an understated way, never allowing the voice to come between the story and the listener. His timing and phrasing is wonderful, both vocally and on guitar (he also played fiddle, button accordion and recorders on the album I believe).
The songs are wonderful. On the face of it mostly standard fare of the folk singer of the time but they're all gems in their own way and all given Nick's special treatment. I imagine he has a really dry sense of humour. How else could you sing "Give corn unto my horse mother, meat to my man John" and get away with it?
There is something impenetrable about Nick Jones. Having listened to this album thousands of times I'm none the wiser about the man. This is probably partly due to his accident and the fact that he has pretty much been out of view until very recently, but also due to his style. He seems to be content to let the music live it's own life with him almost as a presenter who's job it is to tell the tale with little or no reference to himself. Maybe it's a leap to far but I think of him as the Shakespeare of English folk music with 'Penguin Eggs' as his Hamlet (or should that be omelette???).....
Finally, and this has more to do with who I am than anything else, the style of the record is right up my street. For me the ultimate musical experience is in a small venue where the volume is just a touch above acoustic level and the audience are intent on listening to every facet of the performance. Frankly stadium shows leave me cold and I often find myself well and truly ready to leave about half way through a show. I love the intimacy of a small folk club where the interaction between performer and audience is immediate and personal. And... you can see exactly how the musician goes about his craft.
'Penguin Eggs' is that sort of album.
So, that's my Desert Island Disc. What's yours? 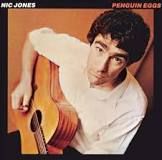