The Hard Life of a Much Traveled Guitar...

I've met a lot of guitars and guitar players in my life. In all sorts of places and situations but some really stand apart.
I first met Julz Parker and Leesa Gentz (I think for the first time anyway) in the dining room of a hotel in Verona, Italy in May 2009. I was there for work along with Alan Samin, Michael Fix and Alberto Meucci and it was my first night after a long flight from Melbourne followed by a long wait at the airport. Julz and Leesa were joining us for a tour of clinics and a few gigs. They were already veterans at this game having toured their duo, Hussy Hicks, though Europe several times.
Anyway, they came in pretty late and joined our circle, sitting down with their guitars and started playing along. They are both gifted musicians and extraordinary singers and it became apparent very quickly that Julz was no ordinary guitar player as well. Julz oozes music and was squeezing all sorts of amazing sounds out of her beaten up old Maton EM225C (it looked old but I later discovered it was about 10 years old and really well traveled). Eevn through my jet lagged eyes and ears I was super impressed and after I got to see some of their shows whilst on the road, even more so. It's safe to say I'm a big fan.
Julz and Leesa also played a key role in getting me back into performing as a musician. At the end of our ten days or so on the road we were sitting round a table in Tuscany, well lubricated with local food and wine, when I decided I would be brave enough to sing one or two of the songs I had written before I gave the game away in 2004. I must have done alright because they recorded the session on their Zoom recorder and I would get little quotes of lines from where ever they were around the world for a year or so afterwards. They encouraged me to keep writing and playing so I owe them an enormous debt of gratitude for rekindling the flame.
Anyway, the same battered old 225C turned up on my bench the other week with a back that was completely stove in along with a bunch of other issues. Once the back came off I could see the work of many different repairers from around the world so I took a picture of the insides before putting a new back on the old axe. While I was working on it I couldn't help thinking of that magic Italian tour 6 years ago and of the fantastic music I saw this guitar make in Julz's hands. It's going to sound great and I'm sure Julz will get many more years out of this old guitar as it travels around the world with her and Leesa. She'll have to, because just today I received a message from Julz in London telling me her Custom Shop Maton had been smashed up by the airline. I've seen the pic and it has too! So I guess we'll see the new guitar back on the bench real soon. We were able to help her out with a loner Maton so Hussy Hicks will still be playing Maton on this current tour.....Thank the Lord!
To check out Julz and Leesa's music go to Hussy Hicks. They're brilliant!
In the meantime have a look at the pics below. This is one tough old guitar.... 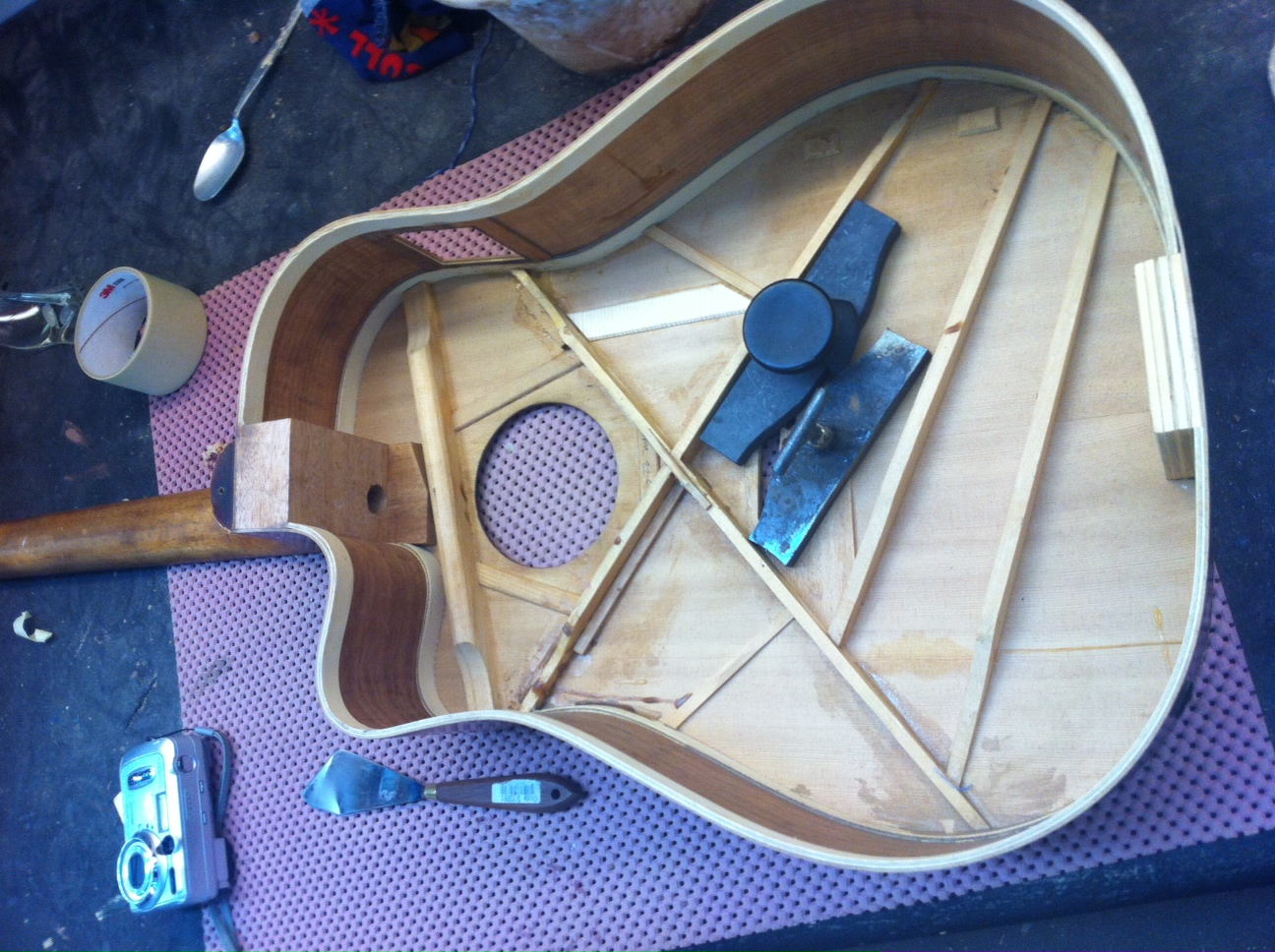 Bridge Plate Removal. Note the previous repairs around the bracing. 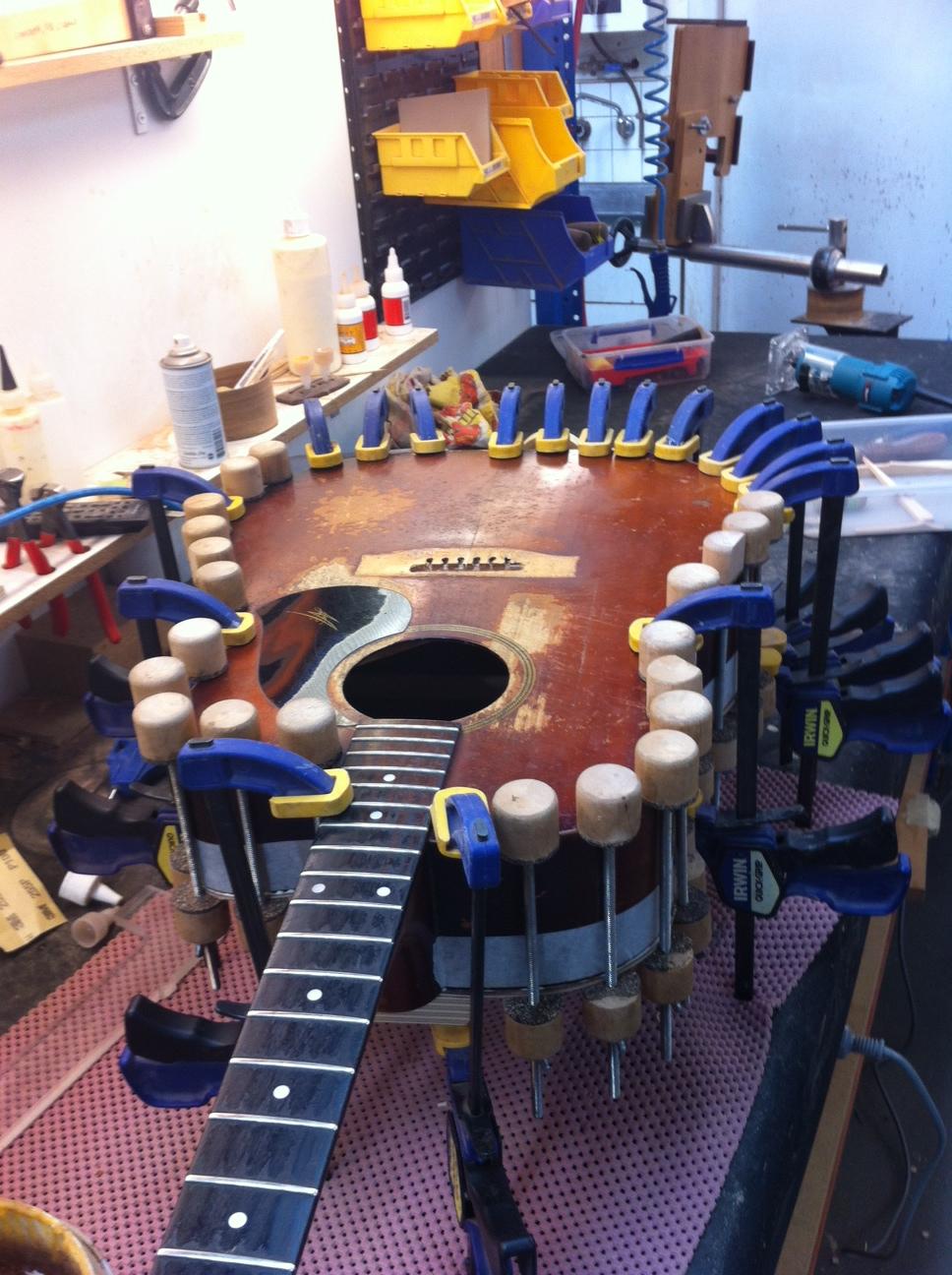 New back glued on. Not too long now before she's sings again..