Live Songwriting Part 5 - Have you seen my Grandfather's violin?

Okay, I admit it. To date this particular social experiment has been a little disappointing, well total rubbish really.
But I reckon I'm on to something this time!
I was out walking this morning and came up with the opening verse below. It's a true story. Some time in the late 80's I sold the violin I had inherited from my Grandfather to pay some bills or the rent or something. I've regretted it ever since; not because it was particularly brilliant (it was a German factory copy of a Stainer violin with a fairly hard tone) but because of what it represented. I sold it through Soundware Music in Geelong where I was working. I remember the lady who bought it really appreciated its history and swore she would look after it. I suspect there were quite a few of these violins around after the First World War when my Grandfather bought it so identifying at again would be almost impossible, but..... The case was quite distinctive as I stick a sticker on the lid which showed the Just Jeans ad from the late 70's featuring a young woman's naked bottom. Very rock'n'roll I thought at the time..... So, if anyone knows the whereabouts of this old Stainer copy violin with the tasteless sticker on the case I would love to know. I'd gladly buy it back!
Back to the song. I don't think this one will take long to finish. When you get a really good opening line the rest of the song tends to write itself. It's really just a matter of uncovering the story and then applying the usual song writing techniques to get it into shape. It's always easier when the story is real too. I guess this was the problem with the song about the guy and his wall (even he's given up on it I notice; It must be too cold to be out working on it). I had no idea about his story and he wasn't telling either. I'll post the finished song along with the lyrics once it's completed.
In the meantime there are a few gigs to talk about. I'll be back at the Peninsula Folk Club next Sunday (August 2) from 5.30pm doing a workshop on how to re-string your instrument and look after it. A little later on that evening as be performing a few brand new songs as one of the warm up acts for the main guest artists 'Interlude' who I am really looking forward to seeing.
Saturday August 8 sees Suzette Herft and myself at The Grande Cabaret Club in Hepburn Springs where we will be performing our shoe 'Farewell Angelina", a tribute to Joan Baez and Bob Dylan when they were the king and queen of the folk revival in the early 60's. The show starts at 1.00pm
Now for the big one! Suzette and I will be launching the CD of "Farewell Angelina" as well as Suzette's solo CD "Roses" at The Spotted Mallard on Thursday, August 27. The show starts at 8.00pm with "Angelina" and we'll be joined by the amazing Pete Fidler for the launch of "Roses" Details for this one on my shows page.
So, here is the opening verse of my new song and a picture of a Stainer violin in case you need help identifying one.
Cheers
Patrick

I often wonder what became of Grandpa's violin,
I sold it many years ago,
When things were slow,
But even so,
I should have found a better way,
To bring some money in, 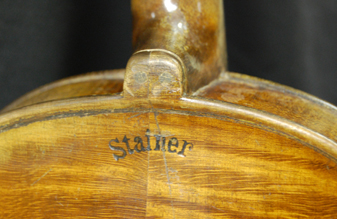