From Gilgandra Down to Bathhurst Town

Every now and then you have one of those moments when your imaginary world becomes real, where fiction becomes fact. It's not always great. I can remember the first few times I discovered life behind the scenes of the music biz, when I realized my heroes were maybe not the perfect people I'd envisaged in my day dreams at school, but that's for another time.
My recent adventures in Tamworth and travels there and back with my good friend Gordon Tresider brought a lot of stories I'd read and wondered  about over the years very much alive. I got to meet and play with some great people at Tamworth as well as helping out Scott Smoothy with our Maton duties. It was a blast and I'm definitely heading back next year, but the biggest thrill was getting to perform my song "The Coo-ee March' on the Maton Showcase on Australia Day. There were a bunch of terrific Maton artists on the bill and I was truly honoured to be able to perform alongside such an array of talent. I guess I knew I was in a different part of the world when i asked the crowd (about 800 strong) if they knew about the Coo-ee March. It was as if I'd gone to Edinburgh and asked the locals if they'd heard of one Robbie Burns. Yep, they knew about the Coo-ee March alright... So, Id better do a good job of this one.
Thankfully I did ok and in the words of the great Shane Howard "got away with it again" (not that Shane ever "get's away with it". He's a true pro).
So that was that. I'd done what I'd set out to do and survived without being run out of town and in fact, I think a few people might have even liked the song.
The next part of the adventure was the drive back to Melbourne (in one day if you don't mind, which is a bit of a push). On the way back we passed through Gilgandra, home of the Coo-ee March and that's where the first of my imaginary world meets reality experiences happened. Once we parked the car and headed down the street I swear I could feel the boy's legacy. The town oozes its history, you can fell it coming up through the scorching pavement (did I mention it was hot?).
We stopped at the statue erected in honour of the Coo-ee Marchers and I posed for the obligatory photograph. I kind of like the fact you can see an IGA over my left shoulder. The town is like that. you get the feeling it stands on its own two feet.
We then drove on a bit to the Coo-ee March display in the Information Centre. It was brilliant! Such a story and presented really well. It was fascinating to read the fortunes of the original Coo-ees. A few of them died of illnesses before they got to the front and many more did not survive the war. Very few made it to old age.
As I was absorbing their stories the waste and futility of it all really struck home. What was the point? Why the sacrifice? We all know what happened over the war years and the echoes of trauma that still ring today. So what did the boys achieve? Why did they go and what of those who came back?
As we were leaving I picked up a book as a memento and told the lovely lady behind the counter that I'd written a song about the march and sung it at a concert at Tamworth the previous day. It may have been a slow day and she might just have wanted a chat but she was genuinely interested and took down my details to pass on to the other locals who has organised the 100th anniversary reenactment march that took place late in 2015. And then she said the words that made it all fall into place for me. "It's been wonderful for the town" she said. "Oh yes, it's done great things for us". And there it was. The spur of the moment decision of those men and boys one hundred years ago to grab their packs and join the march has given this small country town an identity, a source of tourism income and a cause to celebrate. And isn't that worth a holler.. Coo-ee! 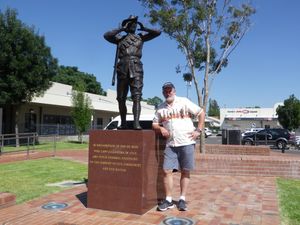